The dates for this event have passed. Please check back again for new dates.

The 6th Chuck Fest will be bigger than ever. With more stages, headliners, and bands performing, there is something for everyone attending Lake Charles’ premier live music festival! Food vendors from all over the lake area will be in attendance.

There will be no shortage of selection, no matter your tastes. The Kid Zone is a fun, family-friendly place where the kiddos play games in the Scion eSports Gaming Truck, enjoy the bounce houses provided Big South Inflatables, indulge in ice cream, popsicles, slushes, and face-painting.

Every city and town in Southwest Louisiana has a festival. These communities are defined by their local festivals. Chuck Fest Foundation, a Louisiana non-profit corporation, was established to showcase Louisiana’s musicians, artisans, restaurants, and brews and bring them all together in the beautiful downtown Lake Charles. Our vision is to make Chuck Fest Lake Charles' signature live music, culture and food festival. Part of this vision is to draw people from across the Gulf South to enjoy all that SWLA has to offer, bringing economic benefits to The City of Lake Charles. This year marks a first for Chuck Fest, with the inclusion of national touring bands!

From Shreveport, she established New Orleans as her career hub. She’s worked with acts like The Revivalists, Widespread Panic, Gov’t Mule, and Charles Bradley, and played events like ACL and the Pemberton Music Festival. Most notably, she was the lead singer for veteran jam band Galactic from 2013 to 2014.

As a cover band, their style is unmatched. Bringing to life such classics as When the Levee Breaks, War Pigs, and others, they do so by mixing brass, electric, and southern blues. The band has performed and recorded with countless national artists such as R.E.M., OK Go, Tom Morello, Wayne Kramer (MC5), Jill Sobule and so many more, all while bringing their distinctive sounds from New Orleans to a national spotlight. Festivals and events such as Monterey Jazz Fest to High Sierra Music Festival, Jam Cruise, Bear Creek Festival and of course the New Orleans Jazz & Heritage Festival outline some of the extensive festival work this band is involved with. National television appearances on CBS (Late Show with David Letterman), HBO (Comic Relief, Treme) and CNN has further exposed Bonerama to a wide range of unsuspecting new viewers.

To describe this party rock group in one word, I would say: “Funeriffic!” You will not leave their show disappointed. You might be sad that it’s over, but not disappointed. 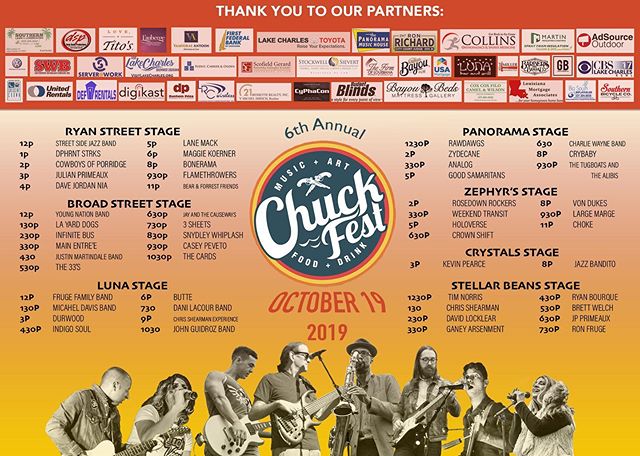 Communities are valued based on the quality of life. We are committed to improving the quality of life in Lake Charles and plan to build Chuck Fest into a music festival that will rival Festivals Acadiens et Creoles and Festival International de Louisiane. The 6th marks a first for Chuck Fest history as a few national touring acts will be in attendance. Keep up to date on future details by visiting chuckfest.org.